Phyllis Anne Duncan (Maggie to her friends) is a retired Federal Aviation Administration safety official who has been writing since third grade. A commercial pilot and former flight instructor, she writes fiction from her home in Staunton, VA. She is a graduate of Madison College (now James Madison University) with degrees in history and political science. Phyllis is the author of two short-story collections, Fences and Blood Vengeance, and has had stories published in eFiction Magazine. She is a submissions reader for eFiction Noir and eFiction Sci-Fi magazines. She has studied writing at Writers.com, the Gotham Writers Workshop, and the Tinker Mountain Writers Workshop. 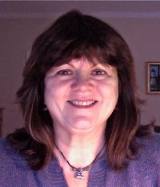 Jan:     Thanks for taking time for an interview.  Let's begin by talking about your interesting background.  What about your background influences your writing?

Maggie:     Ultimately, I think everything about my background somehow appears in my writing. I'm half Scot, half Irish, so rebellion has been a part of my psyche since I was born. I grew up on a farm where my dad wouldn't let his kids laze around, so I think that work ethic helps my writing life. Also, it was my father who said, "Do whatever you want, and don't let anyone stop you." That not only embodies my approach to writing, one of my main characters lives her life that way as well.

I've written about family events--fictionalized, of course--in my collection of short stories, Fences, and writing has always been therapeutic for me, so that's a nice full circle.

Also, my allegory of self when I write is my strong sense of social justice, enhanced by the fact I'm a knee-jerk, bleeding-heart, foaming-mouth liberal and proud of it. That imbues everything I write.

Jan:     Where were you on that terrible Tuesday when the horrors of 9-11 unfolded?

Maggie:     I was the general aviation significant event coordinator for my section of the Federal Aviation Administration, and when the first plane hit, the initial thought was it was a large business jet, so I was called into the Accident Investigation operations center just in time to see the second plane hit. When it was evident this was no accident, my main concern was for the people I was responsible for, and I sent them home immediately. It was the most difficult day of my professional life, having to stay there while my brother and my then-husband were begging me to leave. I stayed because my father, a career soldier, had imbued me with a deep sense of service to country, and I knew I couldn't leave. After things settled, I was so angry that terrorists had used what I loved, what I spent most of my life involved in--aviation--to disrupt our sense of security.


Jan:     And what impact does that have on your work?

Maggie:     As for the impact on my work, I found I couldn't sleep or come to terms with what had happened until I wrote a story where someone escaped from one of the Twin Towers. It's loosely based on some firefighters and civilians who survived and were rescued, but it was very cathartic for me. I've since turned it into a novel, actually two, which I talk more about below.

Jan:     Tell us about the status of your current writing work.

Maggie:     I've been trying to have short stories published and have had very modest success--one last year, two this year, so that's promising for next year. In the meantime, I go between several different longer works, which are in various stages of completion, editing, revising, adding, and cutting. I'm never satisfied.

Maggie:     I hope people will like reading my novels for two reasons. First is that I usually take a current event and come at it from an unusual perspective, e.g., the events leading up to the Oklahoma City bombing from the bomber's point of view. Second, I've been told I have two, very memorable characters in my works. I think so, too, and I hope that the female character, who is strong and self-assured (i.e., everything I'm not), will be appealing.

Jan:     So when you begin work on a novel, what comes first for you, characters or plot?

Maggie:     Since I've written several manuscripts about the same two characters, I'd say they come first, and then I find interesting situations and settings to put them in. I'm very familiar with their back-story, of course; so seeing how they react to these situations and settings is exciting and often unexpected. My work, even my short stories, are very character-driven, and that's also the kind of writing I love to read. I think that's because I've always been a people-watcher, so characters will always take center-stage in something I write.

And writing about current events doesn't necessarily mean the plot is already established for you. I may take something like, say, a Soviet mole in the FBI, which people are familiar with, but then riff off a subplot that's purely fictional but which ties into the main plot. Whereas my characters come from picking traits and histories from real people and other fictional characters, the plotting for me is intuitive. Something comes up, I start writing it, and it gels. What results may be completely different from what I originally had in mind. I'm sure that's not "kosher," but it's what works for me.

Jan:     What do you know now about your writing that you didn’t know five years ago?

Maggie:     I'm more comfortable with my writing now. Even though I had a book published in 2000, five years ago, the thought of sharing what I'd written was scary. My writing is who I am, and, well, what if someone doesn't like what I've written? Does that mean they don't like me? As I've grown as a writer and accepted the premise that you have to write for yourself, not someone else, I've become more accepting of my own writing. However, it still shocks me when someone says my writing is good.

Jan:     What is your writing process?  What does a good writing day look like for you?

Maggie:     I write something every day, either a blog post or a new scene for a novel or a short piece. I have a work schedule, since writing is now my job: four hours in the morning, four in the afternoon. I do occasionally take time off to spoil grandkids, but being retired from the daily grind means if I want to write from eight in the evening until midnight, I don't have to feel guilty about it.

Those stretches of writing also involve research, a lot of it. Since I write about current events or recent history, I spent a lot of time on Google making certain I get my facts as accurate as possible. (Of course, sometimes the facts need a little "enhancement" to be interesting, but that's why they call it fiction.) When I break from writing or researching, I read for pleasure, though, as a writer, can you ever really read for pleasure?

Jan:     You have a lovely writing blog as well as a political blog and you devote a fair amount of time to keeping these current.  Tell us a bit about how you balance online blog time and work on your novels?

Maggie:     I actually have a detailed writing work schedule. I blog on writing on Mondays and Fridays. Wednesday is the day for my political blog (aptly named "Politics Wednesday"). Occasionally, I'll do extra posts if something inspires me. On blogging days, I try to get the posts done in the morning, take a break, then edit, revise, or compose in the afternoons. I will occasionally write a post ahead of time and set it up to "go live" on its usual day, but I've been pretty consistent in keeping to that schedule. I found I needed to do that. Otherwise, I played around too much in my free time--computer games and television--and I wasn't being as productive in my writing as I wanted to be. So, every month, I print out the schedule and stick it where I can see it when I'm at the computer, and I track my hours, as if I'm on a time clock, so I make myself stick to it.

Maggie:     I think blogging is important for establishing that new writer requirement, "The Platform." I've been pleased with the number of followers and hits on the writing blog, Unexpected Paths. Its tag line is "Random thoughts about writing, the writing life, and the journey to publication," so that leaves it open to many different topics. I try to do a "craft"-type post a couple of times a month--setting, character, and the ever-important grammar. I share my writing joys and frustrations, and the good thing is, people comment to let me know I'm not the only one. Writing can sometimes be so insular, so internal; you forget there are others out there with you on the journey. They can inspire you, and you can learn from them.

Stay Tuned for more of Maggie's Interview in Part 2 on Tuesday, August 21, 2012. Maggie will tell us more about her current work and what she plans to write next.

Jan Bowman’s work has appeared in Roanoke Review, Big Muddy, Broadkill Review, Trajectory, Third Wednesday, Minimus, Buffalo Spree (97), Folio, The Potomac Review, Musings, Potato Eyes, and others. She won the 2012 Roanoke Review Prize for Fiction. Her stories have been nominated for a Pushcart Prize, Best American Short Stories and a story was a finalist in the “So To Speak” Fiction Contest. She is working on two collections of short stories and currently shopping for a publisher for a completed story collection. She has nonfiction work pending publication in Spring 2013 Issues of Trajectory and Pen-in-Hand. She writes a weekly blog of “Reflections” on the writing life and posts regular interviews with writers and publishers.   Learn more at: