Writers are like gardeners in that they depend a lot on hope and sunshine as they plant seeds, water, and add fertilizer in its various forms. Much of what happens after the words or seeds are planted depends upon luck, skill and knowledge of the gardener or writer. But unintended consequences occur, because no matter how much you know or think you know at a given moment, you can never know enough. Which is to say, ignorance is not bliss. It creates most of the trouble in the world.


I learned this lesson the hard way in an early story I wrote years ago. I intended that a particular character’s trouble bordered on tragic. But I didn’t know enough. I painted her with too much “word paint” and instead of coming across as a tragic figure, she ended up being oddly funny. I discovered this when I gave a reading and I struggled to fight back tears, as the audience began laughing, because the unintended consequences of my heavy-handed management of details produced an amusingly absurd character. Afterwards, people in the audience commented on my comic timing and sense of humor. I felt like a fraud because I had screwed up. 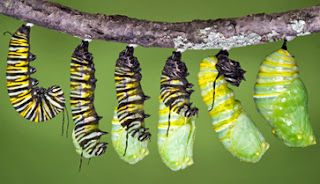 I am reminded once again of that story because I truly screwed up something in my garden a couple of weeks ago. I spotted an odd caterpillar in my garden munching happily on a green pepper plant. I plucked it off, and although I sometimes take creatures into nearby woods and release them, I found a giant hole in a pepper that was almost ripe so I killed it. I felt bad after doing that because I hate to kill anything.


Imagine my feelings this week when I happened to read an article and see pictures of Monarch Butterflies and realized I had “murdered” a Monarch in the caterpillar stage. I feel terrible about this.  So I decided to write this to educate others.  Maybe we can save a couple of butterflies.  Read the article below for more information.