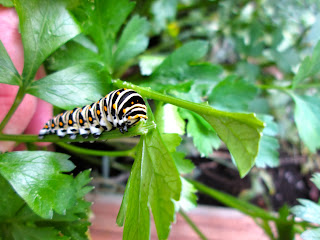 Previously (see Entry # 179), I wrote about caterpillars (larvae) in my garden that grow up to become (chrysalis or pupa) and then Monarch Butterflies. Here in Maryland, September and October marks the last chance for a fourth generation of caterpillars to form pupa for a couple of weeks, before they turn into fully formed Monarch Butterflies, stretch their wings, eat a snack, and fly off to Mexico ahead of the heavy frosts. Caterpillars and butterflies that fail to complete the cycle and escape to more welcoming climates will die. 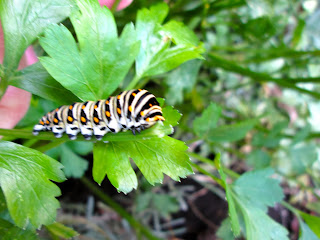 During October, I watched five caterpillars as they evolved in my backyard herb garden. All moved on except for this little guy. Sadly, he or she is the only one to remain. It is a procrastinator. While the others have gone on their way, this one seems content to munch on juicy parsley. It seems quite relaxed – at least as much as I can tell – and he or she will die without ever going through the complete cycle. No trip to sunny Mexico for this one. "He" is a serious procrastinator, and doesn't want to fly.
Flight does have risks, but remaining earthbound too long also brings a limited future for this caterpillar. And - I have been thinking about nature in this context – and of how writers tend to procrastinate. But I wonder. "Can planned procrastination be useful?"

In Roy Peter Clark’s book, Writing Tools: 50 Essential Strategies for Every Writer, Clark notes that almost all writers procrastinate, and while we tend to think that it is a vice, rather than a virtue, he raises the possibility that writers might do well to explore ways to turn delays into something constructive, rather than destructive. Clark says, “What if we found a new name for procrastination? What if we called it rehearsal?”

If we did, we would need to seriously engage in mindful thought.
Clark suggests that good writing and effective revision requires a process of mental preparation. Through a series of rehearsals, the mind tries out ideas, it explores and discards (often reluctantly) the excess that will never find its way to a final destination – as a finished novel, story, or essay.
Perhaps, it is as Clark says. "There is a Zen-like quality to the wisdom of periods of inaction." And shaping work into form requires a time of mental rehearsal. "The writer must not write in order to write. To write quickly, you must write slowly. To write with your hands, you must write in your head."    (Unless you are a caterpillar...)
============================================
About Jan Bowman