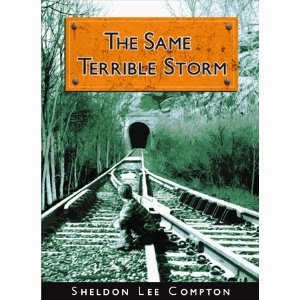 Sheldon:  I’m not sure how many writers can say it, but it I was contacted by Foxhead Books for a manuscript. I suppose many writers can say that, but count me among them. Stephen “The Rock” Marlowe sent me a note asking if I had a manuscript. Of course I did. Sometime later I had an okay to move forward with the pages, which became The Same Terrible Storm. I was blessed that Stephen had seen my work and sought me out to provide something to Foxhead, where I’m as comfortable as a writer can be.
Jan:  What are you working on now? And what do you see yourself working on a year from now?
Sheldon:  A year from now, who knows? That’s the Buddhist in me, I guess. But I have submitted a second collection of stories, titled at this time as When Alligators Sleep. Day-to-day, I work on a novel titled forever and nevermore, as Brown Bottle. I love Brown, but he keeps going places I never thought to give. There are briars and tanglevines. He wants to go the hard way, and so I follow.
Jan:  What were your favorite childhood books? Do you still have them? Ever reread them?
Sheldon:  My favorite books as a child were the Childhood of Famous Americans series at my local library. My dad, good Lord rest his soul, took me there when I was six or seven and I started checking out the whole series. I wanted to be a football player, a botanist, a naval captain, all in the same summer, depending on what book I was reading at the time. Pretty soon I settled on being a writer. I wrote a couple stories, showing them to my dad, who said I had potential. I was inspired.
I started buying books by Stephen King and writing stories in the horror genre. My dad was happy. When I was twelve, he made me throw all my collected books into a creek near the house. But he gave me my start and for that I’m grateful.
Jan:  What are you reading now and what are you planning to read next?
Sheldon:  I’m reading In the Devil’s Territory by Kyle Minor now and have Knockemstiff by Donald Pollack on my shelf up next. I hope they both knock me out.
Jan:  What book had the greatest impact on your thinking and writing life?
Sheldon:  Two books:  The Stories of Breece D’J Pancake by Breece D’J Pancake and Coming Through Slaughter by Michael Ondaatje. The first showed me I could write about my region without falling into sentiment, and the second showed me the wonders of lyrical writing. I had a thought after reading these two books, the thought being that perhaps I could write about where I’m from in a lyrical style without falling short. We’re not all Mark Twain, I suppose. Some of us are part Twain and part Dickens, and that’s all right by me.
Jan:  Is there a book on writing that you’d recommend to any aspiring writer?
Sheldon:  Stephen King: On Writing. King places storytelling in the foreground with this book, the first time I’ve seen that done really well in a book about writing.
Jan:  What is the most useful advice you’ve ever received and what advice have you chosen to ignore?
Sheldon:  The best writing advice I’ve received was after I let my uncle read a short story I had written when I was twelve. An accomplished Appalachian poet, my uncle took the mini-workshop seriously and told me that a town the size of the town in my book (based on my hometown of Virgie, Kentucky) may not be a town big enough to place an airport in. He taught me, in that one comment, about the suspension of disbelief, and how you can’t get by with certain things in fiction. Maybe in truth, but not in fiction. I’ve rarely outright ignored advice, unless it was calculated. For instance, if a fellow writer ever told me my subject matter was too this or that. Fitzgerald said we all have one or two great themes, and mine has been set in stone. If anyone or anything compromises my advancement of that theme, I’ll set it aside.
Jan:  Thank you for taking the time for this interview. I look forward to reading more of your work.
Chris Helvey, Editor/Publisher of Trajectory said this about Sheldon Lee Compton.   www.trajectoryjournal.com
Sheldon Lee Compton is one of the most honest writers working today. He rips the truths of our lives out from their hiding places and jams them in our faces. Below is a brief quote from one of his stories from his new collection The Same Terrible Storm. We believe this brief taste will leave you hunger for more from this fine young writer.

From Bent Country excerpted from The Same Terrible Storm: I steadied myself on the embankment. Below, down the hooknose incline of brush and gravel, ran the tracks, glinting like a school of silver fish running in the moonlight to chase the C&O. I stood carefully, leaned my head back so it was only me and mother-fish moon in a blanket of black, and pissed loudly.

Sheldon Lee Compton lives in Eastern Kentucky. His collection of short stories, The Same Terrible Storm, (2012) was published by Foxhead Books. His work has appeared in numerous journals and been nominated for several awards, as well as anthologized on many occasions. He is a past founder and editor of three literary journals. To learn more, visit bentcountry.blogspot.com.

=============================
About Jan Bowman
Winner of the 2011 Roanoke Review Fiction Award, Jan's stories have been nominated for Pushcart Prizes, Best American Short Stories, and a Pen/O’Henry award.  Glimmer Train named a recent story as Honorable Mention in the November 2012 Short Story Awards for New Writers. A recent story was a finalist for the 2013 Broad River Review RASH Award for Fiction, another story was a 2013 finalist in the Phoebe Fiction Contest; another was a 2012 finalist in the “So To Speak” Fiction Contest.  Jan’s fiction has appeared in numerous publications including, Roanoke Review, Big Muddy, The Broadkill Review, Third Wednesday, Minimus, Buffalo Spree (97), Folio, The Potomac Review, Musings, Potato Eyes and others.   She is working on two collections of short stories while shopping for a publisher for a completed story collection, Mermaids & Other Stories.  She has nonfiction publications in Trajectory and Pen-in-Hand. She writes a weekly blog of “Reflections” on the writing life and posts regular interviews with writers and publishers.   Learn more at: www.janbowmanwriter.com or  visit blog:  http://janbowmanwriter.blogspot.com          Facebook:  janbowman.77@facebook.com

Email ThisBlogThis!Share to TwitterShare to FacebookShare to Pinterest
Labels: INTERVIEWS