Kenton Kilgore's first young adult novel is "Dragontamer's Daughters." He took much of his inspiration for it from his childhood in Arizona and his studies of the Navajo people. He has just released the second novel in this series:  Dragontamer's Daughters, Part 2: Stormcaller.    Available for Kindle and for Nook and iPad. 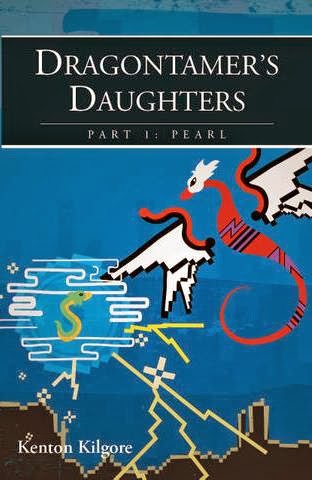 Background:  The Dragontamer's Daughters, the first book in your series begins in the unforgiving high desert in the Old West of an alternate Earth. Isabella, who is almost 13 years old, and her eight-year-old sister, Alijandra scratch out a meager life with their parents. Their home is a shack deep in the lands of the Diheneh, the indigenous people, far from the family’s former country of Ysparria. And they find a small dragon. And the second book continues the story.


Jan:   What are you writing now? Will you write a third book for the series?

Kenton:    I don’t anticipate writing a third Dragontamer’s Daughters; the two books tell the whole story of the two girls and Pearl, at least for now.  I’m currently writing Lost Dogs, a young adult science-fiction novel set on present-day Kent Island, about two dogs who witness the end of the human race.


Jan:   What was the inspiration for your young adult series featuring girls and dragons?


Kenton:     Dragontamer’s Daughters started off as fairy tale I wrote for my daughters, who were 9 and 4 at the time.  As they grew, I kept expanding and rewriting the story, until it became 600 pages across two books.
Jan:    What have you learned from the process of writing, publishing, and marketing to young adults?

Kenton:    I’ve found that there is a need and a desire in the young adult market for honest, original works.  There are many, many young adult books published every year, but a lot of them are derivative, chasing after Harry Potter or Twilight or Hunger Games.  Young-adult readers are always looking for something new and different, and my goal is to give it to them.


Jan:    You have chosen to work with CreateSpace to produce your books. How has that worked out for you? What are the


advantages and disadvantages?
Kenton:    I’ve been nothing but pleased about working with CreateSpace.  It was very easy to upload and format my books so that they would look just as good as traditionally-published works.  By using CreateSpace, my books are automatically available on Amazon, and I can purchase discount-rate copies from them to sell at book signings and events.  The only costs I incurred through CreateSpace were printing and shipping of review copies that I ordered during the final editing so that I could see what the physical book would look like.  And even that wasn’t obligatory: CreateSpace provides a digital version of your printed book that you can look at online to see how it will turn out.
Jan:    How have your interests changed and evolved as a writer since your graduate school days?


Kenton:    Back then, I was all about plot and spectacle.  These days, I’m more interested in characterization.  A lot of sci-fi and fantasy stories don’t have good characters, ones that seem like real people whom you can care about.  So that’s most important to me when I’m writing.


Jan:    Who are among your favorite writers and what are you reading now?


Jan:    In December you donated 100% of your profits from your novel to the Navaho Water Project Charity to dig a well to provide clean water on the Navajo reservation.  What was your inspiration for this project? How can interested readers donate to this project?


Kenton:    Dragontamer’s Daughters is steeped in Navajo culture: names, clothing, foods, family relationships, tribal government, religious beliefs, you name it.  Even some passages of dialogue are in Navajo (or, at least my best attempt as a non-speaker).  So when I came across the link to an article on the Navajo Water Project that my cousin Ron Martinez had posted on Facebook, I decided to jump right on it.  Anyone who’s interested in it can visit http://www.navajowaterproject.org/


Jan:    What is the best writing advice you ever received and what advice have you chosen to ignore?


Kenton:    The best advice I ever received was from J.R. Salamanca, a creative writing teacher I had in college.  He taught me to be careful and precise with words, and to rid my writing of unnecessary or weak ones.  The advice I’ve chosen to ignore is to “just write and don’t worry about whether it’s good or bad.”  I used to do that, and it lead to a lot of carelessness and poor writing.  So, it takes me a while to write, but I believe the quality is much better than what I would have produced had I not been meticulous.
Where to find Kenton Kilgore online
Website: http://www.kentonkilgore.com/
Blog: http://kentonkilgore.com/blog/

Where to buy in print
http://www.amazon.com/Kenton-Kilgore/e/B008F95POO/ref=ntt_athr_dp_pel_1

==============================================
About Jan Bowman
Winner of the 2011 Roanoke Review Fiction Award, Jan's stories have been nominated for Pushcart Prizes, Best American Short Stories, and a Pen/O’Henry award.  Glimmer Train named a recent story as Honorable Mention in the November 2012 Short Story Awards for New Writers.
A recent story was a finalist for the 2013 Broad River Review RASH Award for Fiction, another story was a 2013 finalist in the Phoebe Fiction Contest; another was a 2012 finalist in the “So To Speak” Fiction Contest.  Jan’s fiction has appeared in numerous publications including, Roanoke Review, Big Muddy, The Broadkill Review, Third Wednesday, Minimus, Buffalo Spree (97), Folio, The Potomac Review, Musings, Potato Eyes and others.   She is working on two collections of short stories while shopping for a publisher for a completed story collection, Mermaids & Other Stories.  She has nonfiction publications in Trajectory and Pen-in-Hand. She writes a weekly blog of “Reflections” on the writing life and posts regular interviews with writers and publishers.   Learn more at: www.janbowmanwriter.com or  visit blog:  http://janbowmanwriter.blogspot.com
Facebook:  janbowman.77@facebook.com